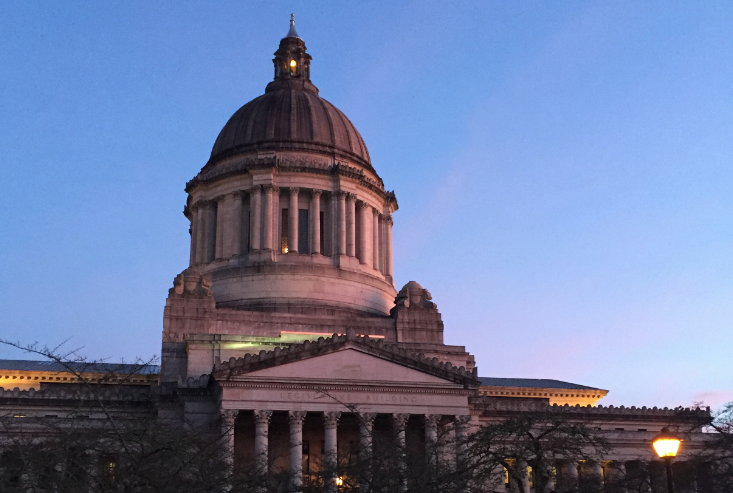 Behind the Olympia Curtain – March 2017

March 28th, 2017 Posted by keepfilminwa blog, get informed 0 comments on “Behind the Olympia Curtain – March 2017”

Over the past two weeks, the Senate and House released their proposed two-year operating budget for the state. The proposals released from each chamber reflect the priorities of each party, with the Republicans having majority in the Senate and the Democrats having control of the House. Once the House passes its proposal, the negotiations for a final budget will begin in earnest.

The Keep Film in WA campaign did not expect or anticipate that our bills would be included in either budget. As Representative Marcus Riccelli (3, D) suggested on Film Day, our bills are considered NTIB (Necessary to Implement the Budget) and are alive until the very end of session. Tax incentive programs are generally an end game negotiation, so it just means that we have to keep the pressure on! On March 13, for the third year running, we rallied hundreds of filmmakers from across the state to make the trek from their various hometowns to Olympia, where they convened under the Capitol dome for a full day of lobbying. For hours, constituents met with legislators in their own offices across the Capitol grounds to make the case for maintaining the film incentive.

It’s rare that an industry shows as much enthusiasm and dedication for representing their own interests as the Washington film community has, and though our professional lobbying efforts are incredibly important, there’s no substitute for the kind of grassroots support we saw on Film Day this year.

In addition to the lobbying efforts, Film Day 2017 also included virtual reality and augmented reality demonstrations, giving legislators and attendees alike a glimpse at today’s ascendant storytelling media and clearly demonstrating the need for Washington State to stay on the cutting edge of the industry. And of course, no Film Day would be complete without zombies, as you can see in King 5 Film Day special, embedded above.

For an exhaustive rundown on the day’s events, including a whole ton of pictures, read our full report right here. Attending your legislators’ in-district Town Hall event remains one of the most effective (and easiest!) ways to lobby. When making one’s case to an elected official, there’s really no substitute for an informed and in-person appeal, especially when it’s backed up with your own personal story. Thanks for those that attended your local events – and a special shout out to those constituents in the 3, 6, 22, 36, and 43 legislative districts who followed up with the Keep Film in WA campaign to tell us what their local elected officials had to say about the Film Bill.

If you have any information about Town Hall events scheduled in your district, please email us so we can help spread the word—[email protected]

Keep Film in WA in the Community During the campaign the Keep Film in WA staff spends time in the community talking to film professionals about how they can be involved. This month, Washington Filmworks Executive Director was invite to rally the troops at a few local events including Filmapalooza and Share Grid’s Launch event.

Think of Filmapalooza as a sort of 48-Hour Film Project World Cup, where winners from all the previous year’s contests around the world compete against one another, in a long weekend of screenings, parties, and networking. Keep Film in WA is also happy to welcome ShareGrid to Seattle! ShareGrid is a service that brings the sharing economy to the film industry, providing a platform for filmmakers to rent out their idle film and photography equipment-cameras, lenses, risers, lights, and yes, even drones. With a built-in insurance policy, the arrangement can be a win-win for both the owner and the renter.

In April, Amy Lillard will be participating in events in both Bellingham and Spokane – come and visit!

The World Premiere of Our Washington-Produced Public Service Announcements

In March, we also began releasing this season’s Keep Film in WA’s public service announcements. We’re launching them one at a time (so no, you cannot binge-watch all of them right now, sorry) and so far only the first has gone live, The Spokane Film Project’s Fil-Bill, which takes a closer look at where all that in-state film production money actually ends up. It’s an edifying microeconomics primer for both legislator and layman. Give it a watch, if you haven’t already, and watch for more PSAs in the coming weeks. The next PSAs we will be posting were produced by the students at the Seattle Film Institute, so stay tuned!
As we debut these videos, please share them with your peers and your legislators. Not only do they do a good job illustrating and breaking down key details about the film incentive, they’re also all great examples of Washington State talent.